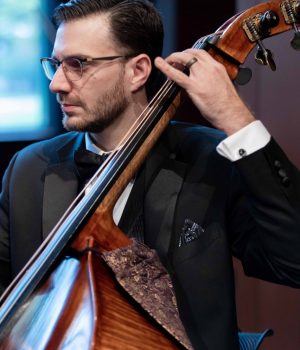 Jeremy Beyer grew up in Algonquin, IL, and began his musical studies on cello in the eighth grade. As a junior in high school, he picked up the bass, which became his primary instrument upon entry into the Northern Illinois University School of Music, where he earned his Bachelor of Music degree in Music Education (2006) and Master of Music degree in Music History (2014). Jeremy joined the Kishwaukee Symphony in 2003 and was named principal bass in 2018. He has also served as assistant principal bass of the Fox Valley Orchestra in Aurora (www.foxvalleyorchestra.org) since the orchestra was founded in 2009.

Jeremy has studied the string bass with John Floeter of the Joffrey Ballet and Tim Shaffer of the Elgin Symphony Orchestra and Grant Park Orchestra, and jazz bass with Marlene Rosenberg. Outside of the world of classical music, Jeremy has extensive performance experience in a multitude of musical genres. At NIU, he learned viola da gamba in the Early Music Ensemble and erhu in Music of China. As a jazz bassist, he performs regularly with the Matt Loeb Trio, Chicago Hot Five, and the Barb City Stompers traditional jazz quintet. He has played bass guitar with a variety of rock and metal bands, currently with After School Special, a classic rock and blues cover band composed of teachers, in the Libertyville area. The ensemble that commands most of his time, however, is his contemporary string quartet, New Vintage Strings (NVS), which performs regularly for weddings, restaurant entertainment, and other events throughout the Fox Valley and northwest suburbs. Jeremy co-founded NVS in 2018 with his wife, Emily Beyer, violin; Maura Brown, violin; and Allison Zabelin, viola: www.facebook.com/newvintagestrings; newvintagestrings@gmail.com; @newvintagestrings

As a music educator, Jeremy has held teaching positions in Burlington, Yorkville, Lincolnshire and Hampshire. Presently, he teaches guitar, music theory and orchestra at Dundee-Crown High School in Carpentersville. His hobbies include hiking, gardening, mixology, and collecting guitars, folk instruments, and vinyl LPs. He lives in Elgin with his wife and their two cats/faithful practice companions, Kora and Siku.