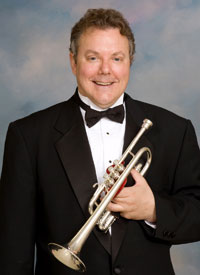 Kevin Davis is currently in his 30th season as principal trumpet with the KSO. He has appeared as soloist several times with the KSO, most recently in 2022. Kevin has performed with a wide variety of musical organizations. In Illinois he has performed with the Rockford and Glenview symphony orchestras, the First Free Church Orchestra, and various productions at Starlight Theatre (Rockford). In the greater Detroit area, he has performed with the Macomb, Pontiac-Oakland, Rochester, and Warren symphony orchestras, the Meadowbrook Estate Show Choir (OU), as well as various brass quintets and community bands in both states. Kevin studied with Jim Underwood (Detroit Lyric Opera, Columbus Symphony Orchestra), Louis LaRose (Detroit Symphony Orchestra), and very briefly with Arnold Jacobs (Chicago Symphony Orchestra). In addition to performing, Kevin recorded the KSO for several years free of charge and produced the CD used by the Illinois Council of Orchestras as part of the process of naming the KSO the Community Orchestra of the year in 2009. Kevin earned a B.S. in Music Education from Oakland University and earned an M.A. in Counseling Psychology with Emphasis in Depth Psychology from Pacifica Graduate Institute. He completed the two-year Jungian Psychotherapy Program at the C. G. Jung Institute of Chicago in 2018 and was a Professional Affiliate Member of the Institute from 2018 to 2021. He served on the Board of Directors from 2020 to 2022 and is currently on the Institute’s Development Committee. In addition to his musical and psychological interests he has traveled extensively to Europe, Asia, South America, and throughout the United States. Kevin’s free thesis, Manifesting Archetypal Energy Through Music, examines the intersection of music and depth psychology and is of interest to performers, psychotherapists, and the general public. Kevin strives to integrate all of his life experiences into meaningful performances with the KSO to enrich your life through music at every performance.