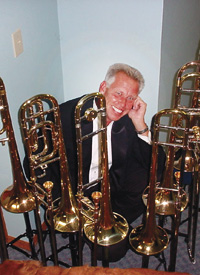 Kirk Lundbeck is a 1976 graduate of Sycamore High School. He received his Bachelor of Music (B.M.) degree in 1981, with an emphasis on trombone performance, and continued his studies in trombone and instrumental conducting through 1983. He has studied with some of the finest trombone instructors in the world, including Mr. James Mattern, Mr. Anthony Garcia, and Mr. Michael Mulcahy. He is currently studying with Mr. Jay Friedman, Principal Trombonist of the Chicago Symphony Orchestra. Mr. Lundbeck is in his 43rd season as the Principal Trombonist of the Kishwaukee Symphony Orchestra.

In 2013 he was awarded the first Sycamore High School Music Hall of Fame Legacy Award along with the Kishwaukee Symphony Orchestra’s Concertmaster Ann Montzka Smelser. Often sought as a featured soloist and clinician, Lundbeck freelances throughout the Midwest, is the former lead trombonist of the “Shananigans” Big Band and the “Class Act” Big Band, and is the leader of his own jazz trio, “The Black Tie Jazz Trio” which performs regularly throughout Northern Illinois. He is a regular contributor of articles about trombone pedagogy on several professional trombonists’ websites and has been featured in articles in the International Trombone Journal, The Brass Herald, and the PGA Magazine.