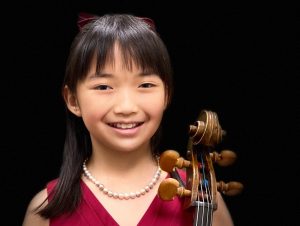 Ella Wimbiscus is a 12-year-old cellist. Eager to follow in her older sister’s footsteps, she began learning the cello at 2½ with her mother. Since the age of 5, she has also been a student of Hans Jørgen Jensen, a faculty member of Northwestern University’s Bienen School of Music. At the age of 8, Ella made her solo orchestral debut with the Sinfonia da Camera as a winner of their concerto competition, performing the Hungarian Rhapsody by David Popper. Her second solo orchestral performance soon followed as a winner of the DePaul Concerto Festival 2020, where she performed with the Oistrakh Symphony of Chicago. In October of 2021, Ella soloed with the Highland Park Strings Orchestra, followed by a second solo appearance with the Oistrakh Symphony of Chicago in February of 2022 as a second-time winner of the DePaul Concerto Festival for Young Performers.

In the spring of 2022, Ella performed a recital program on WFMT Introductions. She was awarded a full scholarship to participate in the Orford Music Festival, in Orford, Quebec, 2020, a program for college students. In 2018, Ella participated in the Musica Mundi International Chamber Music Course and Festival in Belgium. She has performed in masterclasses with some of the finest teachers/performers such as: Jérôme Pernoo, Wolfgang Emanual Schmidt, Claudio Bohórquez, Mario Brunello, Lawrence Lesser, Lluís Claret, Natasha Brofsky, and Michel Strauss.

Along with her mother and older sister, who are both cellists, Ella enjoys bringing music to the community.

Ella is a budding ballerina and an avid reader, and she enjoys doing crafts and playing with her adopted stray cat, Peta. 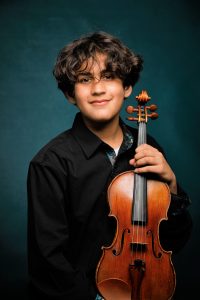 Neal Kotamarty Eisfeldt, 13, is a Merit Scholarship Fellow at the Music Institute of Chicago’s Academy, a training center for advanced pre-college musicians, and he studies violin with Almita Vamos and Injoo Choi. He started his violin studies at the age of three and a half at the Betty Haag Academy. He is also a fellow of the Chicago Musical Pathways Initiative and recently received a lifetime fellowship into NPR’s From The Top youth family. His solo performance and interview will be broadcast on From the Top in February of 2023.

In the summer of 2022, Neal made his entry into the world of composition in collaboration with the Chicago Civic Orchestra and Chicago From Scratch and composed his first solo piece, named “Ukrainian Dream and Cradle” in dedication to the pain and suffering of the Ukrainian people.

Neal made his solo debut at the age of ten at Carnegie Hall, winning first place at the Crescendo International Music Competition (multiple years). He also made his solo orchestral debut at the age of 11 with the Midwest Conservatory of Music (postponed due to COVID-19). He has won top honors in several competitions including the Society of American Musicians, the Sejong Music Competition, the DePaul Concerto Festival, the Walgreens National Concerto Competition, the International Young Artist Concerto Competition, and the Midwest Conservatory of Music. He won the overall Grand Prize in all categories up to 25 years old in the ENKOR International Festival, with a jury of 500+ members from 70+ countries. He was also awarded the First Prize and the Exceptional Young Talent Special Award at both the Bonn and Salzburg Grand Prize Virtuoso competitions. Most recently, he was awarded both Rising Star and Top Performing Artist in the Sound Espressivo International competition with 140+ participants performing for an international panel of judges from major conservatories and orchestras around the world.

In addition to performing solo, Neal enjoys playing chamber music with the Rosa and Scaleno quartets in the Music Institute of Chicago’s Academy, his favorite music being Dvořák’s “American Quartet.” He is an avid orchestral musician as well, playing in the Academy’s orchestra and formerly in the Midwest Philharmonic Orchestra where he played pieces such as the Rachmaninoff Symphony No. 2 in E Minor, Op. 27 (complete), and the Tchaikovsky Symphony No. 6 in B Minor, Op. 74 “Pathétique.” Neal has taken master classes with renowned musicians such as Ani Kavafian, Ray Chen, and Augustine Hadelich, and he has also received coaching from laureates such as Rachel Barton Pine, James Ehnes, Julia Fischer, and Philip Setzer.

In his free time, Neal enjoys listening to his favorite violinists, Itzhak Perlman and Jascha Heifetz, as well as cooking and spending time with his sister. 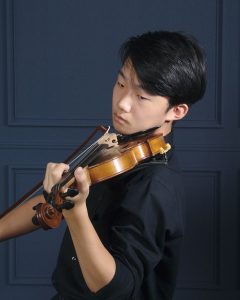 Violinist John Lee, 17 years old, is currently a senior at Vernon Hills High School. He has been playing violin for 12 years and studies under Almita Vamos and Injoo Choi. He has been a member at the Midwest Young Artists Conservatory (MYAC) for 8 years, currently serving as the concertmaster in the MYAC Symphony Orchestra.

Through master classes, John has had the opportunity to perform for decorated artists such as Annie Fullard, Nelson Lee, Janet Sung, The Callisto Quartet, Gerardo Ribeiro, Desiree Ruhstrat, and Mimi Zweig. 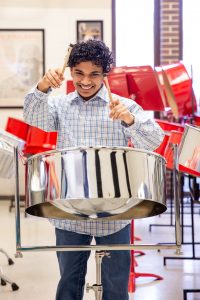 Jaden Teague-Núñez is 14 years old and was born in Panama City, Panama. He moved to the USA in 2011 and began studying steelpan and piano (classical and jazz) at age 8 and 10, respectively. He attends DeKalb High School where he serves as the drummer for the Jazz Ensemble and performs with the Marching Band and Steelband.

Among his growing list of accomplishments, Jaden has been a guest steelpan soloist with the Humboldt State University Steelband in Arcata, California, and has performed with the Northern Illinois University Steelband. He has performed at the Percussive Arts Society International Convention in Indianapolis, Indiana; and, on several occasions, has appeared at the Illinois Music Education Association (ILMEA) Conference. He attended the percussion and steelband session at the Birch Creek Music Performance Center summer academy in Door County, Wisconsin.

In addition to his passion for music, Jaden practices mixed martial arts (MMA) and enjoys playing on his PlayStation 5.