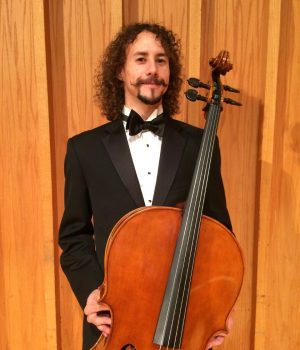 Alister began playing the cello in the fifth-grade orchestra and continued in the school system through high school, including an appearance in the Idaho All-State Orchestra. He attended Idaho State University, where he graduated with an Honors Bachelor of Science in Physics, and minors in Applied Mathematics and Music. He spent 5 years playing in the Idaho State Civic Symphony, 5 years in the University Chamber Orchestra (3 years as principal), 4 years as a member of Quartet Consensio, and many appearances in various other small ensembles.

He studied under Nancy Wilson during high school, an under Tom Attebery and Eleanor Cox at Idaho State University. He studied quartet performance under Keum-Hwa Cha.

Currently, he is a Ph.D. candidate in Physics at Northern Illinois University, where he is investigating electron sources for accelerator physics applications. He has been playing with the Kishwaukee Symphony Orchestra since 2017. When not studying, he enjoys reading, playing Zelda and going for runs with his wife, Jennifer. He and his wife are active members of Kishwaukee Bible Church, and they enjoy serving musically and directing the annual summer sports camp.