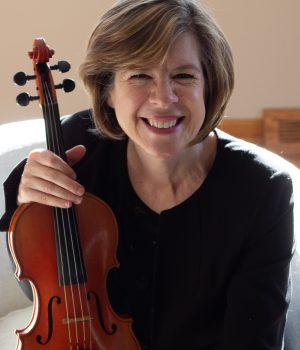 Ann Montzka Smelser began playing violin at the age of 3 with the help of her mother and father, Marilyn and Arthur Montzka. Later she studied under Kazuko Numanami and Sarah Hersh at the Oberlin College Suzuki Program and later with Rebecca Sandrok and Pierre Menard in Illinois.

After college, Ann toured extensively with the Ruggieri String Quartet and performed with many orchestras and chamber ensembles. Ann is currently principal 2nd violinist with Camerata Chicago and concertmaster of the Kishwaukee Symphony Orchestra.

Ann became a Registered Suzuki Teacher Trainer in 2005 and currently teaches Suzuki Pedagogy at both Northwestern University and Northern Illinois University. She teaches about 40 private students and is director of the CSA Suzuki Strings Program at NIU. Ann also teaches at Music Institute of Chicago. She enjoys working with Suzuki families and teachers at institutes and workshops throughout the United States as well as Singapore, Lima, Peru, Costa Rica, and Mexico City.

Ann lives in DeKalb with her husband, Linc.  They are proud parents of daughter, Genevieve, and son, Benjamin, who are currently pursuing music careers as well.