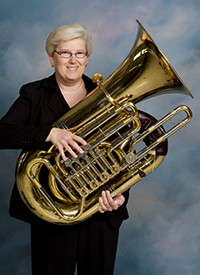 Deborah Shofner is Director of Bands at Kimball Middle School (Elgin) in School District U-46. This is her 34th year as a music educator. She received her undergraduate degree in music education from Northern Illinois University in 1981 and her graduate degree in conducting from NIU in 1992. While at NIU, she studied conducting with Mr. Stephen Squires and Dr. Elwood Smith. She studied tuba with Robert Bauchens, retired from the Lyric Opera of Chicago orchestra, and Charles Schuchat, of the Elgin Symphony Orchestra.

Teaching duties in District U-46 include the Concert Band at Kimball Middle School; the Intermediate Band, Beginning Band, and 5/6 band lessons at Century Oaks Elementary School, Creekside Elementary School, Highland Elementary School, and Hillcrest Elementry School; middle school sectionals; and organization of the beginning band recruiting program.The KMS Concert Band has received consistant superior ratings at the U-46 Middle School Band Festival and the Music in the Parks Festival. In 2003 they were selected to perform at the Illinios Music Education Association State Convention in Peoria.

Previous bands under Ms. Shofner’s direction have earned many honors, including performances at the Adjudicators National Invitation Festival at the Kennedy Center for the Performing Arts and at Constitution Hall in Washington, D.C.; a performance with Robert Sheldon at the 1997 IMEA All-State/MENC North Central Convention, and a performance at the American School Band Directors Association National Convention in 1998.

She is active as principal tubist of the Illinois Valley Community College Wind Ensemble, Kishwaukee Symphony Orchestra, Kishwaukee Concert Band, and DeKalb Municipal Band. She is also active as a tuba solist and clinician.

In June 2010 she was honored as a recipient of the “Outstanding Chicagoland Music Educator Award”. She was listed multiple times in the Who’s Who Among America’s Teachers and has been published in The Instrumentalist band magazine and the Illinois Music Educators Journal.