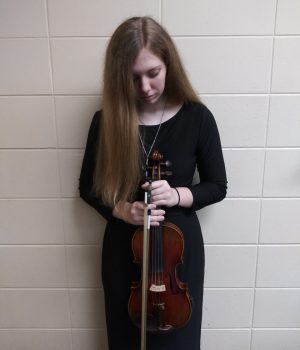 Joining the KSO for her first season in 2021, Emma Fredericks is an aspiring young student musician at Sycamore High School. She began studying violin at age four with the Northern Illinois University Suzuki program under Ann Montzka Smeltzer and has been a regular member of the group for 12 years. She has studied privately under the instruction of Laurie Rodriguez for the past eight years.

Emma has spent her life playing in various string ensembles beginning at age six with the NIU Sprites under Tom Cappaert. She then was a member of the NIU Symphonette, and is now a current member of the NIU Sinfonia, both directed by Linc Smeltzer.

She is also currently a member of the Sycamore High School Chamber Orchestra under the direction of Ken Tonaki. There she has received an Illinois High School Association (IHSA) Solo and Ensemble Division 1 award for violin for the last two years. She has also received the All-District Musician award from the Illinois Music Educators Association (ILMEA) annual competition each of the last three years.

Emma also spends a lot of time and effort with her two independent performing groups: The Classical Duettes, who, with duet partner Eva Peterson, have for four years provided entertainment as event musicians in the local community: www.facebook.com/ViolinsForHire/; and the Apollo Strings Quartet, in their second year and based out of Sugar Grove, with whom she, along with the three quartet members of the Hwang family, produce regular online concerts and live performances: www.facebook.com/StringQuartetEventEntertainment/.

In addition to the violin, Emma also plays flute. She began with the school band program in fifth grade and is now a member of the Sycamore Marching Spartans and the SHS Symphonic Band under the direction of Ken Goodman, where she has also been designated an IHSA Division 1 Solo and Ensemble musician for flute.

Emma is also a member of the local performing wind ensemble group, the Crosswinds Flute Choir, directed by Lynn Hanson, a community-based group of flute players of varying ages and stages who perform concerts within the community: www.facebook.com/Crosswinds-Flute-Choir-1204123479712773/.

Emma’s favorite violinist is Joshua Bell, and her favorite musical piece is the Mendelssohn Violin Concerto in E minor. Emma hopes to major or minor in music in college.