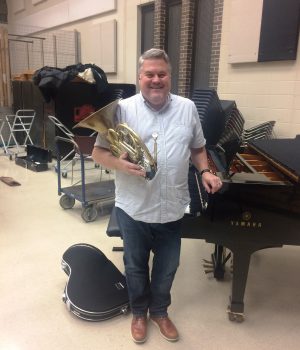 Geoffrey Decker is a native of Shawnee Mission, Kansas, and began playing cornet in fifth grade.  He began studying horn in middle school in 1976 with James Funkhouser of the Kansas City Philharmonic and, later, the Kansas City Symphony.  After high school, he studied horn with David Bushouse and conducting with George Lawner and Zuohuang Chen at the University of Kansas.  While at KU, he played in the KU Symphony Orchestra, the KU Symphonic Band, KU Marching Jayhawks and in the KU Wind Ensemble.  He was a member of the horn sections of both the Lawrence Symphony Orchestra and the Lawrence Chamber Players in Lawrence, Kansas.  In 1985, he pledged the music fraternity Phi Mu Alpha Sinfonia with the Xi Chapter at the University of Kansas.

After completing the B.A. degree in Music at KU in 1986, with an emphasis in Music History, he came to DeKalb in 1988, completing the M.S. degree in Computer Science at Northern Illinois University in 1990.  He then returned to Kansas City, Missouri, to join the professional computer programming staff at Kemper Service Company’s Transfer Agency Division and, in 1995, his employment was transferred to DST Systems, Inc., also based in Kansas City, Missouri.

In 1997, Geoffrey founded and conducted both the DST Symphony Orchestra and the DST Wind Ensemble, both comprised of DST employees and their families and friends.  In 2000, he was invited to conduct the DST Wind Ensemble and members of the Kansas City Symphony in an outdoor concert during ceremonies inaugurating Kansas City’s Avenue of the Arts.  The DST Symphony gave performances that included such works as the Prelude to Act I of Wagner’s opera Die Meistersinger von Nürnberg (The Mastersingers of Nuremberg) and Brahms’ Academic Festival Overture, Op. 80.

After 11 years as a software developer in the financial industry, Geoffrey joined NIU’s Department of Computer Science as an instructor in the fall of 2001.  Now in his 21st year at NIU, he teaches classes at both the undergraduate and graduate levels and mentors students in independent studies and Capstone projects.  In addition to playing third horn with the Kishwaukee Symphony Orchestra and third horn in the DeKalb Municipal Band, he has played with the NIU Philharmonic and was, for many years, a graduate student of Professor John Fairfield’s.

Geoffrey lives in nearby Cortland.  Besides playing horn and gaining proficiency on his Robert Engel Vienna horn, his favorite pastimes are collecting classical CDs and vinyl, studying history and biography, researching his family’s genealogy and cooking.  A member of the Kishwaukee Symphony Orchestra’s Executive Board, he formerly served as the board’s vice president.  He also writes the program notes for the orchestra’s regular performances and updates the orchestra’s website.