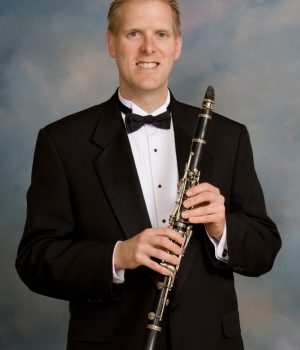 Ken has been a member of the Kishwaukee Symphony Orchestra since 1999. He loves playing his instrument, which gives him tremendous satisfaction.

His major teachers have been Frank Wickes, for conducting, and Steve Cohen, David Harris, and Janet Butterfield, for clarinet. Other major influences in his musical background were Bill Gilmer and Dick Schultz, former band directors in high school and middle school, respectively.

Ken earned a B.S. degree in Music Education from the University of Illinois and the M.M. degree in Wind Conducting from Louisiana State University. He has been Director of Bands at Sycamore High School since 1999, a member of the Wheaton Municipal Band for over 25 years, and a clarinetist and saxophonist with Stage Coach Players since 2000. He is a member of Phi Mu Alpha Sinfonia music fraternity, the National Association for Music Education, and the International Clarinet Society.

He describes his wife Terri as an outstanding vocalist and pianist. Their daughter, Alise McKenna, is following in their musician footsteps as an aspiring pianist and actor in musical theater. They reside in Sycamore and list traveling and attending musical productions as two of their favorite pastimes. Ken has visited every state in the U.S. except Montana, North Dakota, and Alaska.