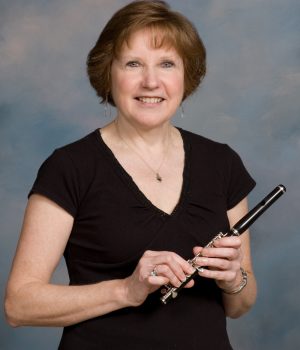 Lynn Hansen plays piccolo and flute with the Kishwaukee Symphony Orchestra, in addition to being the orchestra’s personnel manager; and she has been principal flute with the DeKalb Municipal Band since 1997. She studied flute at Augustana College, holds a degree in flute performance from DePaul University, and studied with Peter Middleton of Northern Illinois University.

Lynn plays flutes and various tin whistles with the folk group “Bend in the Road.” She has played in churches in the DeKalb-Sycamore area, and in other venues locally and throughout the Midwest. She has been heard in more than fifteen musical shows with the Stagecoach Players in DeKalb.

Lynn maintains a studio of private flute students and is in demand as a judge/adjudicator of flute students. She is founder and director of Crosswinds Flute Choir, made up of students and adults who love playing the flute together; and she is director of the handbell choir at Bethlehem Lutheran Church. She is a retired Speech-Language Pathologist from the DeKalb Schools.

Music has always been a part of Lynn’s life and has given her much joy and inspiration. She loves styles from Bach to Shostakovich, Tchaikovsky, and Debussy and is honored to be able to contribute to this wonderful orchestra.