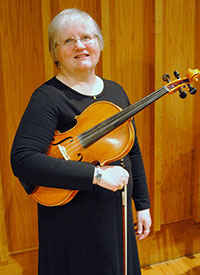 Teresa’s first year playing with Kishwaukee Symphony Orchestra was 2009, but she played in the NIU Symphony before graduating in 1970. While an amateur musician, she has played continuously since starting violin at age 10. In high school, she played viola for one summer to “strengthen her hand” and never looked back. She loves the mellow sound of the viola.

Teresa has played with Rockford Symphony Orchestra since 1972. She retired from the Beloit-Janesville Symphony Orchestra in 2009 to join the KSO. In 1967, Teresa was a charter member of the Danville Civic Symphony in Danville, Illinois and returned to play a concert during their 40th anniversary.

Professionally, Teresa has been a purchasing agent since leaving middle school English teaching in 1978. Buying everything from train carloads of flour to truckloads of steel, she is now a “drug dealer,” buying prescription drugs for UDL Labs, Inc., a generic tablet packager in Rockford, owned by giant generic manufacturer, Mylan Laboratories.

Teresa’s family consists of a crazy Hungarian partner, retired from the Army, and a cellist daughter who lives in Minneapolis and awaits ministering to a Unitarian Universalist church.